Preventing the penetration of water and moisture into the surface without the effect of waterproofing the surface is called sealing. The sealing is generally reactive.

In the sealing method, without removing the surface waterproofing, we can eliminate the possibility of water penetrating into the surface by filling the pores and the inner tubes of the surface or creating a coating.

From the electrochemical point of view, by aligning the poles and creating a repulsive force and reducing the surface tension between the surface covered with the invisible layer, hydrophobic products and water molecules occur, which is an almost circular form of water droplets (rosary beads). 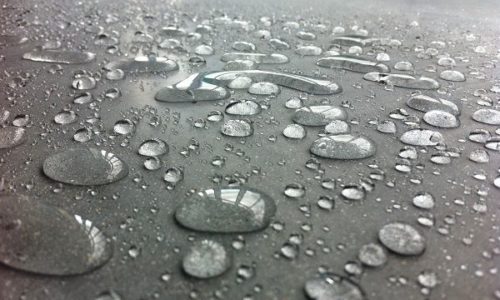 Water absorption and its influence on building materials such as concrete, plaster, stone, etc. due to the type of texture and particle size, as well as the presence of hair cracks that are themselves agents of transfer or absorption of water, have caused long-standing problems such as dandruff , Contamination on the surface, moisture transfer and humidity, resulting in a decrease in the life and quality of building materials, especially in the facades and surfaces of the buildings.
The size of the pores in most building materials is between 5 and 200 nm, while water molecules of 18 nm, and those contaminated by water or directly into the aggregate, are often between 1 and 2 nm, depending on the existence The hydrophilic property, which in most of the mineral and natural materials used in structures, easily penetrates into them and causes many problems.
Therefore, using a variety of polymeric coatings such as paint and color coatings, it is late in trying to prevent the penetration of water in the aggregate, which is primarily due to the particles that make up these superficial layers (generally more than 100 nanometers), coping power And preventing the penetration of free ions, and, secondly, their lack of proper and lasting resistance to ultraviolet rays, which itself shortens the life of these protective layers. Therefore, with the advancement of science and the use of revolutionary nanotechnology, the chemical industry has grown from materials and protective materials that have not been exposed.
Nanoparticles protecting against moisture and moisture, free ions, sulfates and other corrosive and degrading agents on the base and solvent base family in the market, which include monomers or polymers with a maximum size of 5 to 6 nanometers. Come back This material penetrates the gap between the molecular particles and, by forming the membrane or creating a mass, leads to full or partial filling.
Filling action takes place in two ways:
1) Reactive fillers: These products include silanes, siloxanes, silicones, and silicates.
2) Non-reactive fillers: such as oils and organic products, it should be noted that this group of materials has a relatively low useful life of 2 to 5 years due to the high rate of decomposition by microorganisms in nature.
Reactive products are grouped together in two water repeller systems, either hydrophobic and sealing, due to their proximity to the appearance of behavior and behavior, generally their structural difference is not taken into account or both systems are used with the same purpose.

Maximum levels of penetration in products that only produce hydrophobic properties on the surface are 3 to 5 mm, and it is not recommended to use them in areas where there is a potential for changing or decreasing the power of the field for reasons such as extreme lightning strikes. The greater the degree of penetration of these hydrophilic layers in the tissue material, the higher the stability of the sun’s ultraviolet rays, and therefore the rate of loss of these layers, which is annually between 5 and 10 microns, is moderately reduced.

From the new sealing products, we can refer to permanent intelligent nanosilicates. These products combine calcium, potassium, and lithium nano silicates, or from ethyl silicone compounds whose depth of penetration in concrete is up to 30 mm. After penetrating into the depths, these products react with free CHS and sulfates and form silicate gel. The gel has been converted to silica by losing its water to a maximum of 72 hours, which up to 98% causes the capillary tube to obstruct and fill the pore pores between the particles of the body. Surface respiration is also maintained in this system.
Because of the high penetration of nanosilicates in the pores of aggregates and the formation of silicate masses in them, the sealing property is created due to the prevention of water conveyance, which can increase up to 300% due to increased molecular mass, compressive strength and abrasion resistance.
Some of the benefits of these include the following points:

1) No need for re-use and complete stability against sunlight
2) Possibility of neutralization and removal of existing dandruff or removal of sulfates from the surface layers
3) Possibility of sealing properties on wet and wet surfaces and eliminating moisture in existing surfaces.
4) No film or layer formation on the surface and the possibility of paint or coating with various chemical bases on them.
5) Increasing the permeate resistance to chlorine ions by up to 250 percent and resistance to freezing up to 300 freezing periods.
6) To counteract the positive and negative pressures of water and prevent the coloring of the paint or coatings due to moisture or pressure from the breathing surface.

In the wall, most lifts holes are due to the fact that they are often deep in the ground. There is a problem of negative water pressure and the possibility of transferring water and moisture from the concrete wall to the hole. Therefore, silicate primers can be used to seal and prevent water leakage into the lift hole.

Application of silicate primers in sealing of concrete pools

Concrete reservoirs and pools are used for water supply in urban and rural water networks, irrigation networks, water supply for large industries such as petrochemicals and refineries, and so on. But due to the capillary pores and the capillary tubes in the concrete structure, these reservoirs and pools also suffer from leakage. In these cases, using silicate primers, penetrators can easily fill the capillary pores and capillary tubes in the concrete structure and prevent water leakage.